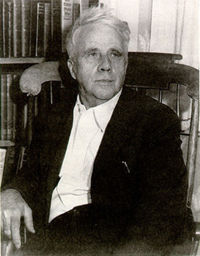 Robert Lee Frost was born in San Francisco, and after his fathers death in 1885, he moved with his family to Lawrence, Massachusetts, where he became interested in reading and writing poetry while in high school. Frost attended Dartmouth College and Harvard University, but never received a degree. He was a jack of all trades, and had many different occupations after leaving school, including a teacher, a cobbler, and an editor of the local newspaper, the "Lawrence Sentinel". His first published poem was "My Butterfly: An Elegy" in the New York literary journal "The Independent" in 1894. A year later he married Elinor Miriam White, with whom he shared valedictorian honours with at his Massachusetts High School.

In the following years, he operated a farm in Derry, New Hampshire, and taught at Derry's Pinkerton Academy. In 1912, he sold his farm and moved his family to England, where he could devote himself entirely to his writing. His efforts to establish himself in England were immediately successful, and in 1913 he published "A Boy's Will", followed a year later by "North of Boston". It was in England where he met and was influenced by such poets at Rupert Brooke and Robert Graves, and where he established his life-long friendship with Ezra Pound, who helped to promote and publish his work.

Frost returned to the United states in 1915, and by the 1920's, he was the most celebrated poet in North America, and was granted four Pulitzer Prizes. Robert Frost lived and taught for many years in Massachusetts and Vermont, and died on January 29, 1963 in Boston.